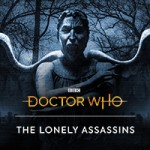 Solve Puzzles and Decipher Clues in Doctor Who on PC.

Doctor Who: The Lonely Assassin from Kaigan Games is your chance to become an investigator and solve a thrilling mystery. How do you find a missing person who left only a phone as your first piece of evidence?

Work with famous Doctor Who characters Petronella Osgood and Larry Nightingale to piece together all of the clues and find out what the hell happened!

Written by the same writers that work on the amazing Doctor Who TV show, this game offers another engaging and unpredictable story. The events in this whole new original story take place in Wester Drumlins. The same home featured in Blink, the famed Doctor Who episode.

Challenge yourself in different ways because this game has elements of horror, puzzles, adventure, and suspense. There’s something special for everyone!

Remember to check the in-game apps on the victim’s phone because every detail is important. It could be filled with clues that will help you to put together the events that transpired.

Watch out for the Weeping Angels and other obstacles that might want to slow you down. Only the vigilant stand a chance of cracking this mystery.

Play Doctor Who: The Lonely Assassin and test your investigative skills by uncovering what happened to the missing person.

How to Download and Play On
Doctor Who: The Lonely Assassin PC?