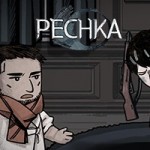 Become The Protagonist In An Interactive Story

MazM: Pechka is an Adventure game developed by MazM. BlueStacks app player is the best platform (emulator) to play this Android game on your PC or Mac for an immersive gaming experience.

MazM has so far enabled us to experience two different stories interactively. The first of these was MazM: Jekyll And Hide, which entered the top three at the Google Indie Games Festival. The other was based on the story The Phantom of the Opera. This time, it is telling a story based on real historical events. MazM: Pechka is the story of a lost nation that started fighting for their country in the early 20th century. The game takes place in the cities of the far east of Russia and allows you to see how the Russian streets & culture were at that time. You can see not only the streets but also the characters and interact with them. A footnote is automatically added for every historical character you encounter.

MazM: Pechka adventure game was released for Android & iOS in June 2020 and lets you witness a dramatic story in an interactive way. You control a protagonist named Pyotr and experience an adventure in which the far eastern cities of Russia are plunged into chaos. Inspired by real historical events, MazM: Pechka lets you advance the story as you explore the map. Including historical trivia, the game has a compelling story and gives you a close look at a real historical period when people joined the resistance and fought for their freedom.