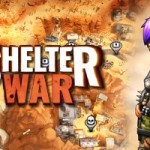 Manage Your Base and Survive in Shelter War: Last City in Apocalypse

Shelter War is an Action game developed by Royal Ark. We craft best action games every day. BlueStacks app player is the best platform (emulator) to play this Android game on your PC or Mac for an immersive gaming experience.

Shelter War: Last City in Apocalypse is the RPG and shelter management sim that puts you in charge of a fortified underground shelter in the aftermath of a world-ending nuclear bombing. Strengthen your defenses, construct infrastructure, and transform your slipshod bunker into an impenetrable subterranean fortress. It was bad enough when the bombs exploded and took society with them — schools, cities, ice cream trucks. But nobody could have predicted that the dead would return, rising from their unmarked graves to wreak havoc on the poor few who survived the cataclysm. Then they formed undead nations with settlements, governing bodies, and armies and things got really crazy. The outside world is a radioactive wasteland where monsters and zombies roam, but you can’t stay inside your shelter forever. Send out scavenging parties to gather vital resources that will keep your people alive. Recover and steal valuable equipment and weapons so you can survive journeys that will take you even further into the barren desert. Raid other players’ fortifications in the action-packed and strategic PvP multiplayer, or work together with your friends to share resources and survive!

How to Download and Play On
Shelter War PC?