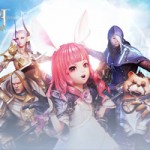 Recruit Legendary Heroes From The World Of Tera To Protect Arborea

TERA: Endless War is a Strategy game developed by JOYCITY Corp.. BlueStacks app player is the best platform (emulator) to play this Android game on your PC or Mac for an immersive gaming experience.

We know what you are thinking: You’ve heard this name before. TERA Online, developed by BlueHole Studios and released in 2011, is one of the most successful PC MMOs and has been played by millions of people. This game (which was adapted to PlayStation and Xbox platforms in 2018) is now adapted to the Android platform by Joycity Corp. We remember Joycity Corp from another successful adaptation, Pirates Of The Caribbean, and a very popular mobile FPS named CrossFire. However, TERA: Endless War is not a “direct” adaptation, because this time it is a strategy game. Although, it takes place in the same world (Arborea) and includes some of the heroes from the MMO game.

The graphics quality of the game is very impressive: It is developed with Unreal 4. You start by choosing between 7 different races and 8 different hero classes. Each hero has a special ability and can level up. Your goal is to save Arborea by resisting the Argon invasion. The playground consists of hexagon tiles with 50 cities. You can capture these cities with siege wars, but be careful: If you are not a guild member, you will be very vulnerable. It is also possible to challenge other players’ heroes with your heroes. Battles use 4X strategy mechanics and require careful calculation of each step. Can you save Arborea from the invasion and become its emperor?

How to Download and Play On
TERA: Endless War PC?