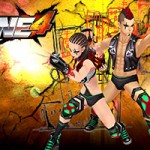 Bust Some Heads in Zone4M on PC

Zone4M is the beat-em-up MMO game by Infovine that features six awesome fighters, tons of cool classes, and over 220 insane battle skills. First released on PC on November 21, 2016, this one-of-a-kind massively multiplayer fighting game comes to mobile for Android and iOS. Duke takes it out in a variety of urban battle zones and lays waste to baddies with an array of attacks, combos, and special abilities.

Welcome to the fighting capital of the world, where skilled warriors come to test their worth against the best around. Now it’s a hive of corruption where brawlers will do anything to win. It’s up to you to clean up this town and save this once renowned city.

Jump into the arena with a variety of different fighting styles, like Capoeira, Tae Kwon Do, Judo, Muay Thai, and more. Lay the smackdown in real-time combat against bosses and countless waves of their minions and cronies.

Choose from six different characters with their own brands of hand-to-hand street fighting. Deck them out in fancy chains and accessories that provide special buffs to your combat abilities.

Sweep these streets of corruption, or take on other players in multiple PvP game modes, including Free-for-all, Item Mode, and Turf Wars involving up to 32 players!